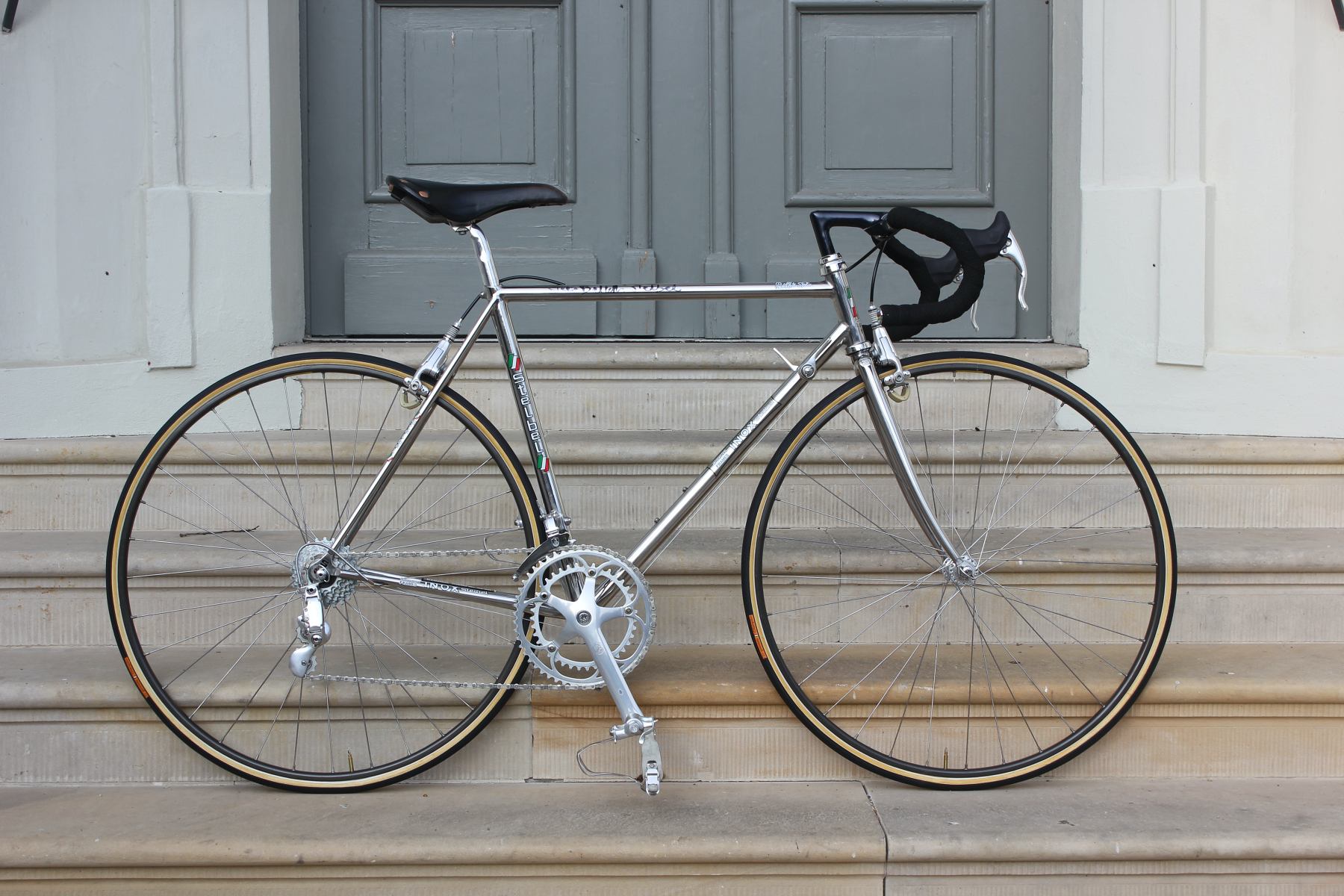 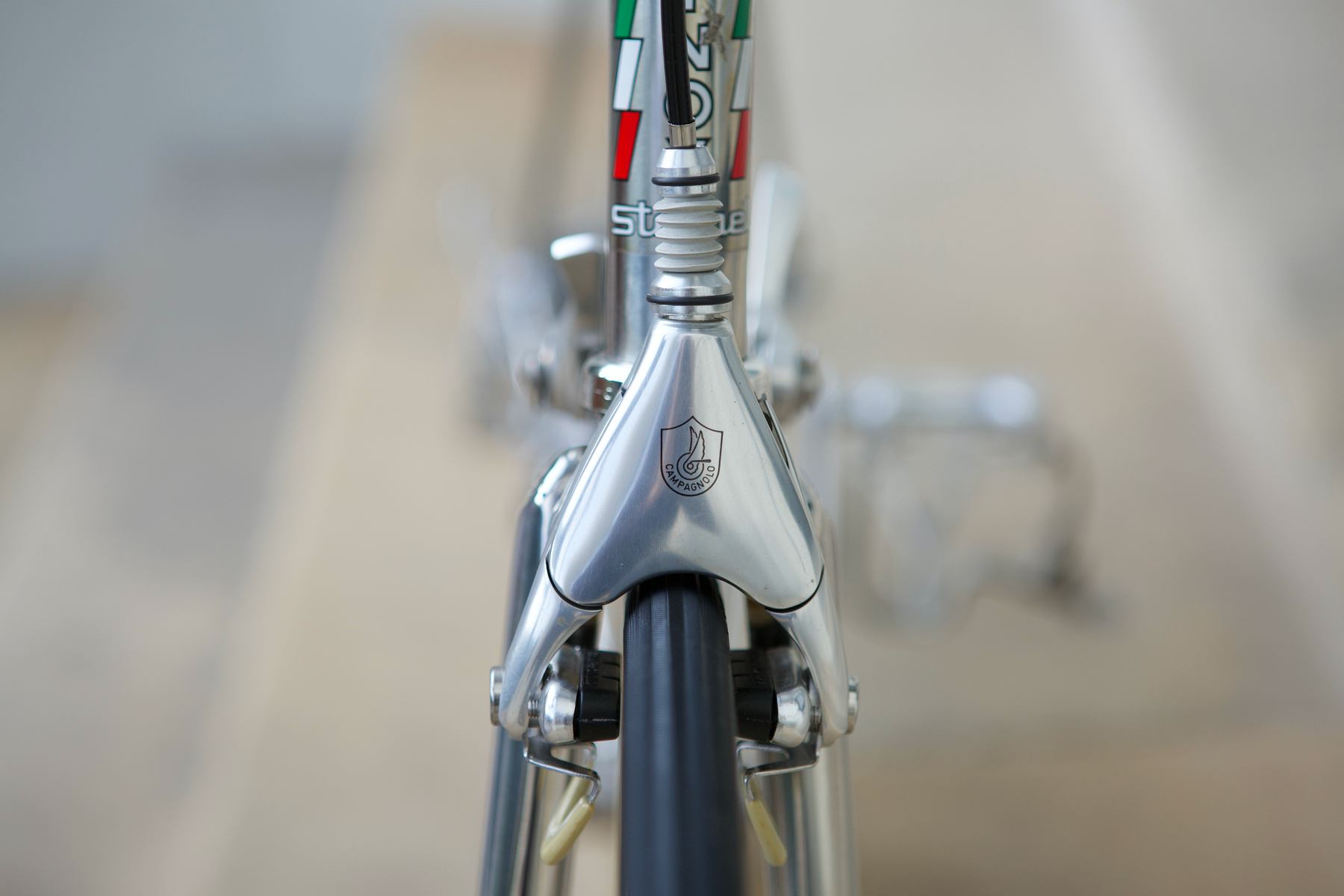 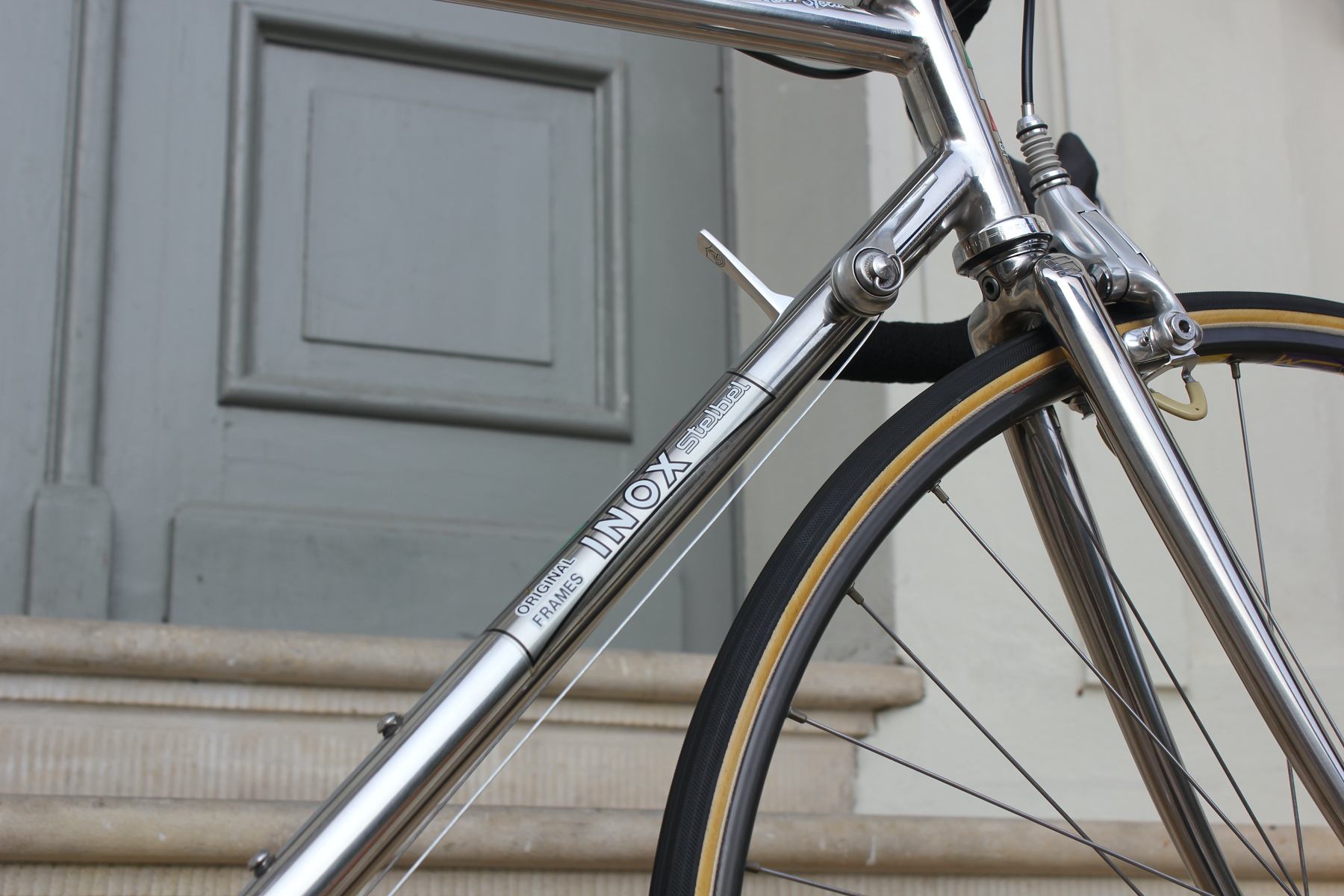 ENGLISH DESCRIPTION
STELBEL INOX - Stainless steel frame of a special kind with Campagnolo C-Record equipment.
Stelbel - a frame builder that immediately conjures a glow in the eyes of true connoisseurs of the scene.
The Stelbel company, at that time not yet to be found under this name, specialized after the 2nd World War rather in the processing of steel tubes in the construction of motorcycles and also for some projects in aircraft construction. The company was one of the first to own and work with a TIG welding machine.

Short excursus TIG: Tungsten inert gas (TIG) welding uses a non-consumable electrode made of pure or alloyed tungsten. Inert gases such as argon, helium or their mixtures protect the arc, which burns freely between the electrode and the workpiece. If high-alloy steels are used, argon-hydrogen mixtures are also used, which can significantly increase productivity. Which filler metal is used depends on the type of welding: manual welding uses a welding rod, whereas mechanical welding uses a welding wire without current. The TIG welding process is particularly recommended for alloyed steels and light metals and for root welding on unalloyed or low-alloy steels.

Back to Stelbel - Stelio Belletti, son of the founder, has always been a great cycling fan and as a boy he was a member of the local amateur cycling team. Since the early 1970s, his experience as a welder drove him to experiment with the production of bicycle frames, combining steel tubes with TIG welding, which was a new technique in the bicycle industry at the time. Encouraged by his father and by the results he had achieved, he decided in the spring of 1973 to create the Stelbel brand (abbreviated from his name Stelio Belletti), which enabled him to separate the production of racing bicycle frames from his father's business.

In the mid-1980s, Belletti's workshop participated in the construction of some titanium prototypes, but then decided to concentrate on the development of the stainless steel project known simply as Stelbel INOX, which was introduced in '87-'88. It boasts a classic look with unparalleled modern performance and offers riders an exemplary handiness that sets it apart from the competition. This attention to detail and high performance is due to the TIG welding technique used in the construction of frames, a technique that has always been a hallmark of Stelbel production.

The INOX Dynamics presented here is one of the early frames still with a classically curved fork. The frame is a dream, the workmanship, the design, this fork with its typical Stelbel "fork head" - simply craftsmanship.

This racer is of course also built with Campagnolo best group of that time. Here we use the C-Record from the first series with the engraved logo, the great Delta brakes and even the original pedals.

What a bike from the master Stellio Belletti - again such a bike that you probably only get once, where you wonder, keep or put it in the store? - An ingenious piece of cycling history.